Hello, I was very busy on my real life until yesterday. I had been made Levi hair ??part way. But I’ll restart his hair from the beginning. 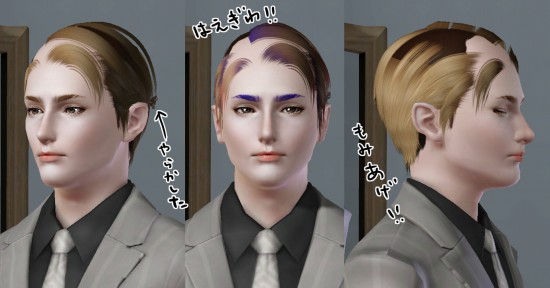 By the way, In Japan, the season is the summer. There are many night festival in the summer in each local area. Some people are wearing “Yukata” to go to night festival. Yukata is kind of Kimono for summer wear.
I guess almost foreigners don’t know difference of Yukata and usual Kimono. If you see people who wear Kimono style in the summer in Japan, Those are almost Yukata.

*Zori* A traditional footwear for the use with a k

Few days ago, I received a strange fan mail on Tum

In The Sims3 CAS. In Milkshape 3D. I wonder that w

His hair texture was almost finished… (^_^)