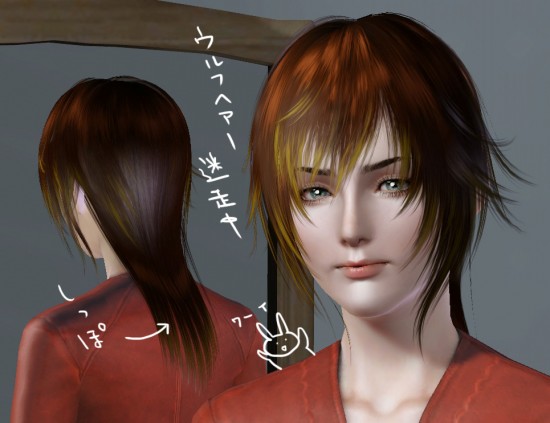 I’m making a new hairstyle for Tumblr 1000 followers.
Today, In Japan is Jugoya. It was nice weather, so I can watch beautiful full moon this year. (^_^)
*
*Jugo-ya (the nigh of the full moon)*
When people used the lunar calendar, the night of the full moon fell on the fifteenth night of each month. The full moon nights were called jugo-ya, and the full moon seen on the fifteenth night of the eighth month was thought to be the most beautiful full moon of the year. The full moon at this time of year looks especially beautiful in the clear autumn night sky. This moon is specially called chushu-no-meigetsu, which literally means the mid-autumn full moon. People traditionally viewed and admired the moon on the fifteenth night of the eighth month in olden times. Even now, many people view and admire the full moon and make offerings to it every year on the night of the full moon in September. This custom is called tsukimi in Japanese. The mid-autumn full moon is also called the harvest moon because crops and fruits are harvested from farms at this time of the year. While viewing the moon, people feel thankful to the moon for the year’s harvest and give a feast in celebration of the harvest. In this sense, viewing the moon is a harvest festival. People also pray to the moon for a large rice crop as the rice harvest is just ahead. There is a custom of offering dumplings, which are called tsukimi-dango in Japanese, and newly harvested crops including taro to the moon on the tsukimi night. Dumplings and crops are usually decorated with silver grass, which is called susuki in Japanese, or Japanese bush clovers, which are called hagi in Japanese, and then offered to the moon. These offerings represent people’s gratitude and prayers to the moon for the crops of the year.
*
One very ancient Japanese legend says that a rabbit pounds rice for rice cake on the moon when there is a full moon, and many people think of a rabbit when there is a full moon. The reasoning for this relationship is unknown, but it might have started with the custom of calling the full moon Mochi Tsuki. There is also another word in Japanese that sounds the same as Mochi Tsuki which means pounding rice for rice cakes. Then, children began to think that they saw a rabbit when they looked at the shape of the shadows of the craters on the moon. People might have thought that a rabbit were pounding rice on the moon between calling the full moon Mochi Tsuki and the children’s imagination.

Hat test + background using green back. I have add

I heard that Serbia was suffered by flood this tim

I have been sleep deprived lately…(=_=) Beca

Although I know that transparent hair has some iss