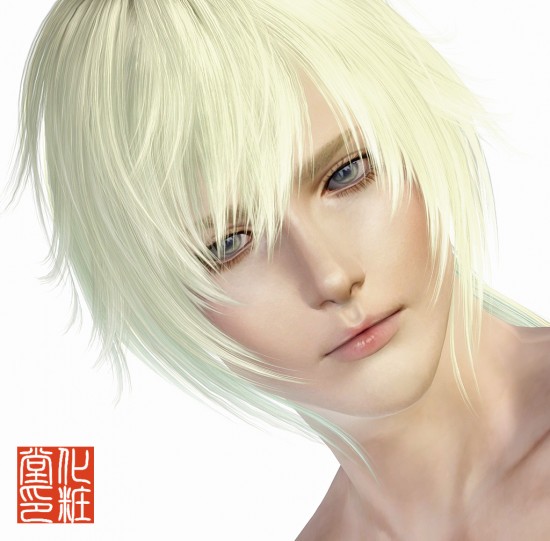 Few days ago, I posted this image on Tumblr. I think some people wonder about this sim’s gender. He is a male sim. :D

I introduce a Japanese TV commercial film. This commercial film has portray the sarcasm of communication of social networking in Japan.
The title is “Battle with Ria-Jyu” Ria-Jyu is a slang words in Japan. It mean the person who full life at offline. Sometimes, they boast their happy life in Twitter or Facebook. So some people think Ria-Jyu is so noisy. In this commercial film, Ria-Jyu was expressed as Shark.
*
“Battle with Ria-Jyu”
*
Observer: Hey look! Ria-Jyu is coming! Everybody! Run away! hurry!
The man on the board:  You are Ria-Jyu!
Shark(Ria-Jyu):  My girlfriend’s home cooking is the best!
Men in the beach: He is rampaging because he want “Like!( on Facebook)”
Man on the board: Annoying! That’s immaterial to me.
Shark: I didn’t sleep before 40 hours, because I’m in busy!
Men in the beach: There you go again. Vaunt of busy!
Woman in the beach: Look!, Hashimoto is doing “Like!”.
Observer: He(=Hashimoto) is doing “Like!” about anything posts.
Man on the board2: You must do “Like!”. Otherwise you will be disliked by Ria-Jyu!
Man on the board: I’ll never do “Like” except for when I really feel that is nice!!
*
Ummm… Oversea people may feel strange about this situation on social networking in Japan. (-_-;) But I can understand this situation well.
We call it “Honne and Tatemae”. “Honne” is Real intention, and “Tatemae” is stated reason(superficial). These are kind of social communication in Japan.

The strap of this Yoda is a free gift of a candy.

New one has been similar to the original than befo

zzzz…. Japan is spring now. Sakura are in fu