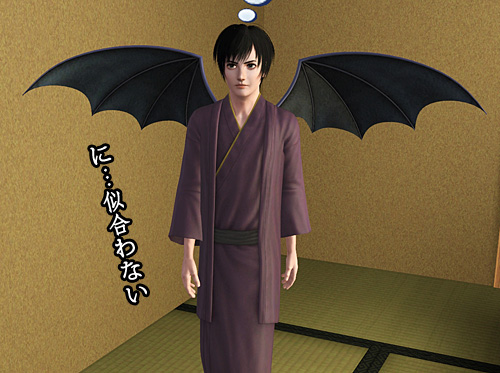 *Oni*
Oni are imaginary symbols of evil. Their original form was first delineated in “Kojiki”(the Record of Ancient Matters), completed in 712 A.D., and they have since appeared in many historical writings and in folktales. As generations passed, the notion of oni was influenced by on’yodo(divination by the principles of Yin and Yang and Buddhism, and they took on a variety of forms. Generally, they are depicted as humans with horns and fangs, as naked but for tiger skin around their haunches, and as beings of herculean strength with fearsome facial features. The bean scattering at the eve of the first day of spring is carried out to drive these oni out of home, and to invite good fortune in. The word oni is often used metaphorically in everyday life; for example, in tag, the one who is “it” is called oni and ruthless people are often compared to oni.

My friend, Bucket made new AOT objects! These are

It’s difficult to make a cute child sim. The

This is a check screen shot of dark color hair.  I